Now available: EAT YOUR HEART OUT

Get a book fact sheet for educators

FAT GIRL ON A PLANE

An unforgettable novel, told in dual Fat and Skinny perspectives, about smart fashion, pursuing your dreams, and loving yourself.

High school senior Cookie Vonn’s post-graduation dreams include getting out of Phoenix, attending Parsons and becoming the next great fashion designer. But in the world of fashion, being fat is a cardinal sin. It doesn’t help that she’s constantly compared to her supermodel mother—and named after a dessert.

Thanks to her job at a fashion blog, Cookie scores a trip to New York to pitch her portfolio and appeal for a scholarship, but her plans are put on standby when she’s declared too fat too fly. Forced to turn to her BFF for cash, Cookie buys a second seat on the plane. She arrives in the city to find that she’s been replaced by the boss’s daughter, a girl who’s everything she’s not—ultrathin and superrich. Bowing to society’s pressure, she vows to lose weight, get out of the friend zone with her crush, and put her life on track.

Cookie expected sunshine and rainbows, but nothing about her new life is turning out like she planned. When the fashion designer of the moment offers her what she’s always wanted—an opportunity to live and study in New York—she finds herself in a world full of people more interested in putting women down than dressing them up. Her designs make waves, but her real dream of creating great clothes for people of all sizes seems to grow more distant by the day.

Will she realize that she’s always had the power to make her own dreams come true? Buy FAT GIRL ON A PLANE

FAT GIRL ON A PLANE in the news

Bustle: If you love 'The Rainbow Fish' read 'Fat Girl on a Plane' by Kelly DeVos

B&N Teen Blog: 30 of Our Most Anticipated June YA Books

Fans of Susan Beth Pfeffer’s Life As We Knew It series and Rick Yancey’s The 5th Wave series will cheer for this fast-paced, near-future thrill ride.

If you’re going through hell…keep going.

Seventeen-year-old coder Jinx Marshall grew up spending weekends drilling with her paranoid dad for a doomsday she’s sure will never come. She’s an expert on self-heating meal rations, Krav Maga and extracting water from a barrel cactus. Now that her parents are divorced, she’s ready to relax. Her big plans include making it to level 99 in her favorite MMORPG and spending her weekend with her new hunky stepbrother, Toby.

But all that disaster training comes in handy when an explosion traps her in a burning building. Stuck leading her headstrong stepsister, MacKenna, and her precocious little brother, Charles, to safety, Jinx gets them out alive only to discover the explosion is part of a pattern of violence erupting all over the country. Even worse, Jinx’s dad stands accused of triggering the chaos.

In a desperate attempt to evade paramilitary forces and vigilantes, Jinx and her siblings find Toby and make a break for Mexico. With seemingly the whole world working against them, they’ve got to get along and search for the truth about the attacks—and about each other. But if they can survive, will there be anything left worth surviving for? 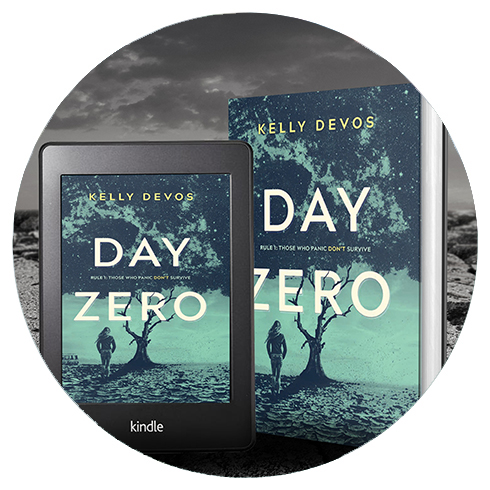 In the sequel to Day Zero, stepsisters Jinx and MacKenna must put aside their enmity and work together to rescue their little brother…and possibly save the world. A nonstop whirlwind of a read for fans of Marie Lu, Rick Yancey and Alexandra Bracken.

RULE ONE: THOSE WHO PANIC DON’T SURVIVE

Jinx
Three months ago, all I wanted was to stay up late playing video games and pretending things were fine. But with my parents’ role in a massive political conspiracy exposed, I ended up on the run, desperate to rescue my little brother, Charles, from the clutches of The Opposition.

I used to hate my father’s obsession with disaster prepping. But as I fight my way across a war-torn country and into a secret military research facility with only my stepsister to count on, I realize that following Dr. Doomsday’s Guide for Ultimate Survival might be our only hope of surviving to see Charles again.

MacKenna
Once, I had it all. The right backstory. The right qualifications. But my life as a student journalist was destroyed forever in the explosions that triggered the country’s meltdown. Now I’m determined to help Jinx get our little brother back. But we also have to find our own reasons to survive. Somehow, I’ve become the first reporter of the new civil war. In a world where your story is your ultimate weapon, I have to become the toughest freedom fighter of all. 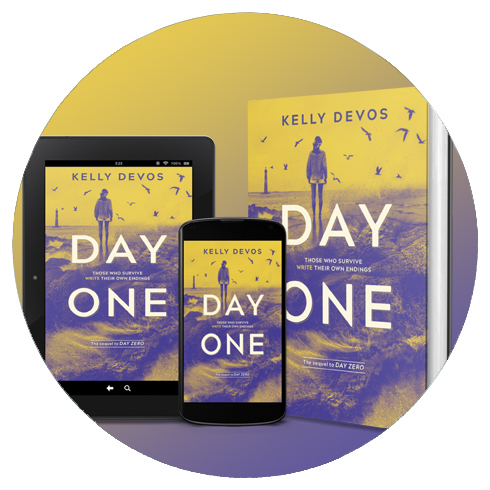 EAT YOUR HEART OUT

Shaun of the Dead meets Dumplin' in this bitingly funny YA thriller about a kickass group of teens battling a ravenous group of zombies.

In the next few hours, one of three things will happen.

3--We'll be eaten by thin and athletic zombies (odds: excellent)

Vivian Ellenshaw is fat, but she knows she doesn't need to lose weight, so she's none too happy to find herself forced into a weight-loss camp's van with her ex-best friend, Allie, a meathead jock who can barely drive, and the camp owner's snobby son. And when they arrive at Camp Featherlite at the start of the worst blizzard in the history of Flagstaff, Arizona, it's clear that something isn't right.

Vee barely has a chance to meet the other members of her pod, all who seem as unhappy to be at Featherlite as she does, when a camper goes missing down by the lake. Then she spots something horrifying outside in the snow. Something...that isn't human. Plus, the camp's supposed "miracle cure" for obesity just seems fishy, and Vee and her fellow campers know they don't need to be cured. Of anything.

Even worse, it's not long before Camp Featherlite's luxurious bungalows are totally overrun with zombies. What starts out as a mission to unravel the camp's secrets turns into a desperate fight for survival--and not all of the Featherlite campers will make it out alive.

A satirical blend of horror, body positivity, and humor, Kelly deVos's witty, biting novel proves that everyone deserves to feel validated, and taking down the evil enterprise determined to dehumanize you is a good place to start 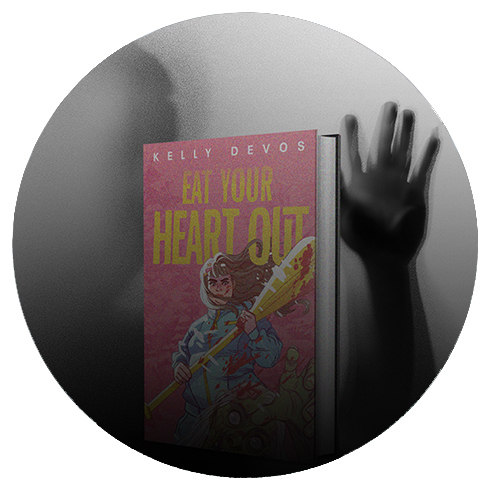 Buy EAT YOUR HEART OUT

EAT YOUR HEART OUT in the news

The Mary Sue: Eat Your Heart Out Is a Horrifying Satire of ‘80s Teen Movies With a Fat Camp Twist

Popsugar: From Zombies to Modern Love Stories, These Are the Best YA Books of June

The Nerd Daily: 2021 YA Book Releases You Need To Have On Your TBR

For Dracula lovers and fans of Diana Urban’s All Your Twisted Secrets, this spine-tingling thriller follows seven horror buffs as their dream trip to a remote Romanian castle turns into a nightmare when they begin to be killed one by one.

Alex Rush is ready for the trip of a lifetime.

She and her friends have made some creepily awesome films together throughout high school, so with only a few months left before they go their separate ways for college, they’re determined to make the best one yet: an epic short film that reimagines the story of Dracula, filmed on location at a remote castle in Romania.

But when they get there, it’s not quite the majestic setting they planned for. Menacing weapons line the walls, the twisted halls are easy to get lost in, and with no connection to the outside world, the group is unexpectedly off the grid. After just a few hours spent under its roof, Alex and her friends have no trouble imagining how this dark, terrifying castle inspired one of the most enduring horror novels of all time.

Only soon they no longer have to use their imaginations to understand the location’s terrifying history—just as they get the film's first shot rolling, one of Alex’s friends disappears, and she’s nearly certain she saw a cloaked stranger lurking in the shadows. As more members of the group begin to meet an untimely demise, Alex is desperate to stop the bloodshed, even if it means facing a monster she never thought would be let loose. 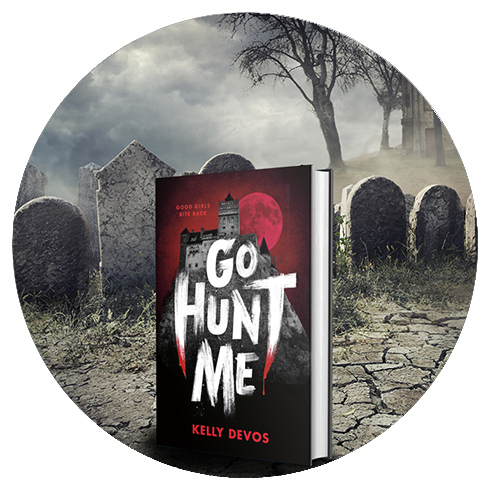